Search
Show only these tours

Sorry, we have no tours with any availability that match your search.

You could try expanding your search on the left. 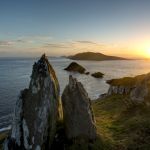 Thanks for making us Ireland's top-rated tour company

A big thank you to all our past guests who have left so many amazing reviews. With 448 five-star reviews out of a total of 455, we are proud to call ourselves Ireland's top-rated tour operator.

Questions about the Wild Atlantic Way

What is the Wild Atlantic Way?

Where does Wild Atlantic Way start and finish?

The Wild Atlantic Way, if you were to begin in the north and travel south, starts in the Inishowen Peninsula of County Donegal and finishes in Kinsale, County Cork. This route would see you passing through counties Donegal, Leitrim, Sligo, Mayo, Galway, Clare, Limerick, Kerry and Cork.

How old is the Wild Atlantic Way?

The Wild Atlantic Way was officially launched in 2014 but the strategies and plans leading to its opening date back as far as the 1960s.

Who created the Wild Atlantic Way?

The Wild Atlantic Way was developed by and is maintained by Fáilte Ireland (National Tourism Development Authority). They are also responsible for the east coast equivalent; Ireland's Ancient East.

How long does it take to travel the Wild Atlantic Way?

To drive the whole of the Wild Atlantic Way would take an estimated 20 hours. And, that's in one go with no breaks. We would not advise this for any journey, especially not one where the majority of roads are narrow and windy. To travel the entire Wild Atlantic Way, stopping at all the main points of interest and to travel at a relaxed pace, 2 to 3 weeks would be ideal.

Can you walk the Wild Atlantic Way?

For anyone interested, it would take about 174 hours (that's just over a week) to walk the Wild Atlantic Way without stopping. Again, this is not advisable. The Wild Atlantic Way is marked as a driving route but it would be possible to walk it in its entirety. Obviously, taking it in smaller sections with regular breaks would be a safer and more enjoyable experience.

Where should I stay on the Wild Atlantic Way?

Finding accommodation along the Wild Atlantic Way is relatively easy. There is an endless supply of Bed & Breakfast, Hotels and Hostels dotted throughout. The best places to stay along the way, depending on your plans, might be the cities of Limerick and Galway or the larger towns in Cork, Kerry and Donegal. These would at least be the best places to stop off and stock up on supplies. If you are looking to get away from the hustle and bustle of busier areas, then you can find numerous Bed & Breakfast, Hostels and Campsites in the smaller villages along the way too. It is always worth making a plan of your stops and booking ahead, regardless of what type of accommodation you choose.

Is the Wild Atlantic Way signposted?

There are signposts throughout the route, as well as numerous tourist information points.

One of Ireland's most romantic and aesthetically pleasing buildings.

The views will not disappoint at this most popular tourist attraction.

The Burren takes its name from the Gaelic for "rocky land" or "great rock".

Find out the tricks of the Irish distillery trade from a newcomer to the genre.

A place of Christian pilgrimage & one of Europe's highest sea-facing cliffs.

A cemetery in Co. Sligo. Drumcliffe is the final resting place of W.B. Yeats.

Built by Charles II in the 1670s as a defence against foreign attacks.

Traditional music and song in a real Irish pub. A true Irish experience.

A technically advanced pottery studio/workshop that is a joy to behold.

The Wild Atlantic Way showcases Ireland's most scenic locations, rugged landscapes and picturesque villages. Seeing these places in person is a breathtaking experience, and so is looking back at the photos you've taken in years to come. Around every corner of the Wild Atlantic Way, there is a photo-worthy scene. Here are just a few examples!

You can now make unlimited changes to your 2022 tour up to 60 days before it starts — at no extra cost.

Find more information on our Peace of Mind Travel Plan.

All our Ireland Tours

Tours for Adults Only

About Adare Village and Thatched Cottages

Adare is a small town in Co. Limerick, known for its quaint and colourful thatched cottages. Adare is considered to be one of Ireland's most beautiful towns so stop and take in the view. Don't forget your camera today - the perfect chance to capture the essence of old Ireland.

Adare. In the heart of county Limerick County Limerick we take time to stroll the main street of the beautiful thatched cottages in Adare

Take a journey through this once troubled city. See the murals of the Loyalist Shankill Road & Nationalist Falls Road. The Troubles took their toll on the economic life of Belfast, but the past ten years of peace have returned much prosperity while the genuine friendliness of the city never left.

Originally built in 1823, Blarney Woollen Mills was mainly used for the spinning and weaving of wool. After it closed in 1973, it reopened in 1975 — as an Irish heritage shop.

A limestone plateau covering 250 square kilometres, The Burren takes its name quite aptly from the Gaelic for "rocky land" or "great rock". While in one sense very fitting, the name does not do justice to what experts have more justly termed "one of the world's most stunningly unique natural heritage regions".

The Burren runs alongside the Wild Atlantic Way.

At the southern-most tip of Summer Cove, on Kinsale Harbour in Co. Cork, awaits the unyielding presence of Charles Fort, a star-shaped stronghold protecting the harbour from sea invaders since its completion in 1682. In recent decades, Irish heritage organizations have restored the fort to the impressive standards it now displays.

The Cliffs of Moher

About The Cliffs of Moher

One of the most popular and most eagerly anticipated attractions on any Ireland Tour, and the views will not disappoint. They rise to a height of 702ft (214m) and 9 miles (14km) long, these sheer vertical cliffs hold a steady, undulating line against the tireless advance of the Atlantic below. A better view of the sea and setting sun you will not find.

The Cliffs of Moher are a Signature Discovery Point on the Wild Atlantic Way. For more information click here.

The Culloden Battlefield Visitor Centre commemorates the last pitched battle fought on British soil, in April 1746. Learn more about the Jacobite intent to overthrow the House of Hanover and return the House of Stuart to the British throne.

Producing whiskey on a modest scale to keep their production at a specialist level. Having manufactured whiskey, gin & vodka since 2012 and bringing hundreds of years of tradition to their methods. Their single malt whiskey has a deliciously unique finish that comes from being matured on the moist, mild south-west coast of Ireland.

Visit Drumcliffe Cemetery in County Sligo where you can read the epitaph on the grave of W.B. Yeats. Found nestled between Ben Bulben mountain and Drumcliffe bay.

Located within Glenveagh National Park, Glenveagh Castle was built by Captain John George Adair between 1870 and 1873. Having made his fortune through land speculation in America, Adair return to Ireland and began large amounts of land in County Donegal. The castle was built in the Scottish Baronial style and is surrounded by a garden and commands stunning views of the nearby mountains, lakes, woodlands and valleys.

About Highland Folk Museum is a museum and open-air attraction located in the Scottish Highlands. It is designed to showcase the domestic and working lives of the early highland people.

Located alongside the River Shannon in County Limerick, on King's Island. Dating back to 922, to a time when Vikings were the inhabitants of the island (Thormodr Helgason, the Viking sea-king, built the first settlement here. The castle itself was built in 1200, under the instruction of King John of England.

Kylemore Abbey is not only one of Ireland's most attractive buildings; since 1920, it has also been home to the Sisters of the Benedictine Order in Ireland. Even today, Kylemore continues to operate as a working Abbey: here, the sisters live, work and pray, as well as welcome visitors from across the globe. Kylemore Abbey's greatest attraction is its location. Nestled at the base of Duchruach Mountain on the northern shore of Lough Pollacappul, in the heart of the Connemara Mountains, it is regarded as one of Ireland's most romantic locations.

Kylemore Abbey can be viewed along the Wild Atlantic Way.

Witness and experience for yourself how Ireland's world-famous, high-quality pottery is created at one of the country's most loved potteries.

The town of Dingle is also a part of the Wild Atlantic Way.

Located close to the Killarney National Park, Moriarty's is an Authentic Irish Gift Store and Restaurant. Hand crafted Irish jewellery, Waterford Crystal and classic and modern tweed fashions and furnishings are all on offer at the gift store. The restaurant is an 85 seater offering stunning views of the surrounding landscape.

Recently recognised as being one of the top 10 gardens in the world, Mount Stewart is a rich tapestry of planting plant life and stunning walking trails. The house dates back to the 19th century, and was the Irish seat of the Vane-Tempest-Stewart family.

Located on the grounds of the expansive and idylic Killarney National Park. Muckross House, and its 11,000-acre grounds, was donated to the Irish state in 1932.

Located on the grounds of the picturesque Muckross House and its impeccable gardens. Take a step back in time and see the Irish farming lifestyle of the 1930s and '40s. A time when the horse was responsible for much of the labour and the weather was the be all and end all in terms of production.

Slieve League Cliffs are found on the South-West coast of County Donegal. Known to be one of the highest sea-facing cliffs in Europe. Take in the stunning view, depending on the clarity of the day, of course, along Donegal Bay and the Sligo Mountains.

The Slieve League Cliffs are also included on the Wild Atlantic Way.

About The Quiet Man Museum

The Quiet Man Museum. A reproduction of the quaint thatched cottage from the John Wayne starring, John Ford directed movie of the same name. all costumes, artifacts and furnishings have been recreated in precise detail, to reflect the setting of the 1952 classic. Located in the picturesque village of Cong, County Mayo.

Pubs (public houses) play a huge part in the culture of Ireland and have done throughout the ages. Sometimes busy, often noisy, but always friendly and welcoming places to meet the locals. In a pub, you will see a full cross-section of Irish society — its a place where people from all classes,Â ages, interests and backgrounds can mix.